The S-4000M REAC Merge Unit allows up to four Digital Snake heads to be merged into a REAC stream where the master device recognizes it as single REAC slave unit.  This important technology enables distribution of multiple input/output units around a location, venue or stage for flexible point-to-point digital snake or V-Mixing System configurations 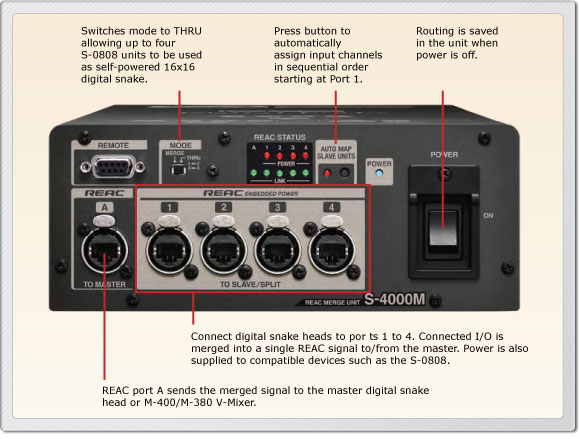 Merge up to four REAC devices together.

The S-4000M merges up to four Digital Snake heads, such as the S-0808, S-1608 and S-4000, and merges the input/ouput to a single REAC signal. Ports 1 to 4 supply REAC embedded power to compatible product such a s the S-0808. The intelligent Auto Map function assigns input channels automatically. REAC master devices recognize the S-4000M as a single REAC slave unit even when multiple digital snake heads are connected.

The S-4000M also serves as a distributor of outputs and/or splitter. Any inputs returning from Port 1 (Master) are distributed to the outputs depending on the devices connected. When S-0808 sare connected, specific output assignments can be set.

Configure Routing from a PC or V-Mixer.

L-Acoustics Takes The Edge in Qatar

Ready To Start Your Project?